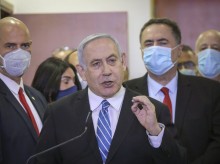 Israeli Prime Minister Benjamin Netanyahu, accompanied by members of his Likud Party in masks, delivers a statement before entering the district court in Jerusalem. (AP Photo/Yonatan Sindel/Pool Photo via AP)

JERUSALEM (AP) — He named names of police investigators and prosecutors. He accused them of using “Soviet style” extortion to turn witnesses against him. He even claimed that elderly Holocaust survivors were on his side, sympathizing with his plight.

Prime Minister Benjamin Netanyahu has long faced accusations of using his formidable oratory skills and flair for the dramatic to sow divisions between friends and foes. But his fulminating tirade against Israel’s legal system — launched in the lobby of the very courthouse where he went on trial for corruption charges — seemed to enter new territory.

Israel has been deeply divided for decades, between religious and secular Jews, between those who favored a deal with the Palestinians and those who opposed it. But Netanyahu’s blistering attack on the legitimacy of Israel’s legal system threatened to shake the very foundations of the state and has remained a topic of debate all week.

“There have always been harsh political arguments, but there was always agreement on the rules of the game,” said Dan Meridor, a former justice minister from Netanyahu’s Likud party. “The prime minister needs to model behavior. Instead, he’s taking his trial out to the street. He’s challenging the existing order and it’s very dangerous.”

Surrounded by loyal deputies and with hundreds of adoring supporters chanting outside, Netanyahu arrived at the courthouse Sunday ready for battle. Before entering the courtroom, he accused police, prosecutors, the courts and the media of an ideologically driven grand conspiracy to oust him against the will of the people. He said he was the victim of a “witch hunt” and made veiled threats against those conducting his investigations.

His months of fiery rhetoric against the institutions of the state he leads have drawn comparisons to his loaded denunciations as opposition leader 25 years ago during the charged period that preceded the assassination of then-Prime Minister Yitzhak Rabin. Netanyahu’s own appointed attorney general says he’s received concrete threats and the prosecutor in the case has been assigned a bodyguard.

“Someone capable of saying those things isn’t fit to be prime minister,” said opposition leader Yair Lapid. “He knows it will end in violence, but he doesn’t care.”

Netanyahu faces charges of fraud, breach of trust and accepting bribes in a series of corruption cases stemming from ties to wealthy friends. He is accused of accepting lavish gifts and offering to grant favors to powerful media moguls in exchange for favorable coverage of him and his family.

Netanyahu, however, claims it is not only he on trial but rather the entire right-wing camp that self-identifies as the “second Israel” long disparaged by its leftist, secular elite.

“The objective is to depose a strong, right-wing prime minister, and thus remove the nationalist camp from the leadership of the country,” he said. “For more than a decade, the left has not been able to do this at the ballot box. So, they found a new trick.”

It’s a message that has galvanized Netanyahu’s hard-core working-class supporters, pitting them against Israel’s diminishing backers of the country’s liberal roots.

For one camp, he is a once-in-a-generation leader being martyred by a faceless bureaucracy for standing up for a strong Jewish state. For the other, he’s a dangerous demagogue who threatens to undermine citizens’ faith in democracy.

“Netanyahu’s fans and followers threatened the state with a civil war,” wrote Nahum Barnea, a veteran Israeli columnist. “In their eyes, the homeland and Netanyahu are one and the same: anyone who tries to draw a distinction between them is the enemy, a traitor.”

The standoff comes just a week after Netanyahu swore in what he called a “unity” government with a former rival aimed at easing just such tensions following three explosive and ultimately inconclusive election campaigns. Benny Gantz, the retired military chief who ran on a platform that Netanyahu was unfit to serve, now appears cowed into submission after joining him as his defense minister and potential replacement.

Gantz said little about the trial, issuing a tepid statement on Twitter saying that he trusts the legal system and law enforcement agencies.

In power since 2009, and for more than 14 years overall, Netanyahu is Israel’s longest serving prime minister. But he still portrays himself as an outsider constantly battling belligerent bureaucrats.

“They don’t care if some obedient poodle from the right comes along,” he charged Sunday, flanked by a dozen of his Likud cronies wearing blue surgical masks. “But I’m no poodle.”

He capped the 15-minute diatribe by invoking the most painful chapter in Jewish history, the genocide of 6 million Jews in World War II.

“One woman told me ‘we were in the forests and we are praying for you,’” he said, describing an encounter with Holocaust survivors. “Another told me ‘wolves are coming to devour you. You are not alone. We are with you.’”

Ariel Kahane, a correspondent for the pro-Netanyahu Israel Hayom daily, said Netanyahu’s base admired his fighting spirit and was convinced he was being targeted because of who he was and what he represented, and that wouldn’t change even if he is convicted on all charges.

“They see him as a good, right-wing prime minister who remains an outsider who was never accepted by the Israeli milieu,” he explained. “Netanyahu is fighting for his life and when he goes to war he goes with guns blazing.”

Netanyahu is not the first Israeli prime minister to go on trial. His predecessor, Ehud Olmert, eventually went to prison for corruption though he resigned long before the trial and fought his case as a private citizen.

Olmert himself said Netanyahu’s court scene reminded him of “the Godfather,” with a crime boss and his loyal soldiers lining up behind him.

“It looked like a group of wild criminals led by the prime minister of Israel,” he told the Ynet site, invoking the incitement that raged against Rabin before his assassination. “He is leading a climate that could end in tragedy.”