In a land rife with disputes, Israel’s Nokia office is a bridge By Aron Heller | Nokia, Monday, 23 Nov 2020 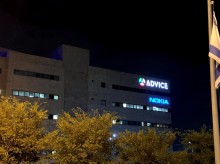 In a country rife with deep disputes, the local Nokia office offers a rare haven in which Israel’s various tribes come together.

The two-story hub in the high-tech zone of the central Israeli city of Kfar Saba houses a variety of engineers from Nokia Software, researchers from Bell Labs and salespeople to local service providers. But in a larger sense it brings together a far more diverse crowd that otherwise would be unlikely to bond in such proximity: Jews and Arabs, secular and observant, Anglo immigrants and grizzled native-born Israelis.

With a mixture of Hebrew, Arabic and English, Nokians of all stripes find common ground over technology. It’s part of a vision that the office’s de facto leader, Vice President of Applications Engineering Guy Shemesh, says is not only the right thing to do – but also good for business.

The coexistence filters down to the technology itself. Nokia is not only the primary telecom infrastructure provider in Israel but also in the West Bank and Gaza, where most of the Palestinian voice and internet traffic runs through Nokia gear. Nokia’s Israeli salespeople work closely with their Palestinian counterparts to build the networks for the Palestinian service providers Paltel and Jawwal, meeting even amid periods of political tensions and street violence.

Dozens of Palestinian software developers work closely, and daily, with their Israeli colleagues at Nokia and politics has never gotten in the way, said Tareq Maayah, the founder and CEO of Exalt Technologies, which provides external tech services to Nokia.

“On a personal level, it is never tense,” said Maayah, who is based in the West Bank city of Ramallah but makes regular visits to the Kfar Saba office even amid corona-related travel restrictions. “Everyone has their own political and national opinion. But it’s fine as long as you understand the person you are working with and that you are dealing with someone you respect.”

Of all his achievements, Shemesh said he was most proud of creating an office in which people with opposing backgrounds could coexist. To do so, his recruiters have undergone training to make the office more inclusive for diverse candidates who have historically been underrepresented in the high-tech sector. He has also consulted with non-profits with expertise in this process who have helped with onboarding.

“As a leader you just need to start the engine. Once you start, it continues by itself. In Israel, we had a completely homogeneous office and now more than 20% of our organization is minorities,” he said. “The small things that make me proud are the day-to-day activities of people sitting around the same table and exchanging opinions. It just goes back to the basic point that we are all the same.”

Women make up more than 25% of the Nokia workforce in Israel, slightly higher than the company’s global figure, and the Israeli branch has hired employees with special needs. Ifat Papo, the country HR manager, noted that of 2020 hires more than a third were over the age of 44, another demographic that was often discriminated against in the youthful Israeli high-tech scene.

Mahmod Mahajna, 26, a full-stack developer from the Arab city of Umm Al-Fahm, said he felt like part of the Nokia team and had helped recruit other Arabs because he knew they would be warmly welcomed and judged solely on their skills. With the backing of higher-ups, he said he was comfortable to freely speak his mind.

“I’m a part of this place and this place is a part of me,” he said. “Besides, this is an office where people are interested in technology, not politics. No one talks about the conflict because it’s not important here. We talk about 5G.”

Other employees, such as devout, ultra-Orthodox Jewish women, required more accommodations. For instance, they were given laptops with a “filtered” internet to prevent exposure to unseemly content, provided with their own microwave and single-use utensils to abide by their Kosher dietary needs and guaranteed to be seated only next to other women.

Tamar Weisskopf (nee Horowitz), a 21-year-old recently married programmer, was among the first observant women to join Nokia straight out of her professional seminary training. While she said she may stick out a bit with her long dress and head covering, she has been warmly included and integrated.

“I’m glad they’ve given this a chance since I don’t think I’m any less effective,” she said. “We seem a little different, but everyone here is respected for their values.”