A focused Netanyahu is down, but not out By Aron Heller | Freelance, Tuesday, 29 Dec 2020 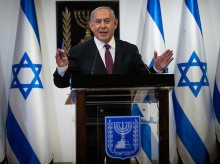 Prime Minister Benjamin Netanyahu gives a statement to the media in the Knesset in Jerusalem, December 22, 2020. (Yonatan Sindel/Flash90)

The prime minister’s unmatched zest for ruling has beaten down and worn out anyone with even a hint of potential to succeed him. Op-ed published in The Times of Israel.

Seated in a plush conference room of a Lisbon hotel in late 2019, Israeli Prime Minister Benjamin Netanyahu was fielding questions from his traveling press entourage. He detailed his meetings with US Secretary of State Mike Pompeo and his Portuguese hosts and delved into his favorite subject – the threat from Iran.

When my turn came, and the major agenda items had already been covered, I asked him how he was coping just days after he was formally indicted on three counts of corruption. This surely must affect your performance and state of mind, I suggested.

“I’m a little different from what people think of me,” he replied, fixing me a steely gaze. “I have struggles, but I’m different. It’s not because I am a robot. I am different in my ability to focus.”

A year, an election, a start of a criminal trial and a global pandemic later, it’s hard to argue with that. Even after more than 14 years in power, nothing has taken Netanyahu’s laser-like focus away from what he treasures most – staying in power.

With Israel now headed toward yet another election, Netanyahu appears to be facing his most perilous political position to date. His coalition just imploded and disgruntled allies are fleeing his embrace. Most significantly, Gideon Saar and Naftali Bennett pose the kind of challenge from the right he’s never had to cope with before.

But it would be foolhardy to count out the wily Netanyahu just yet.

Israel has had leaders as brilliant, as cunning and as ruthless as him, but none who combined such a lethal combination of all three traits. More meaningfully, we’ve never seen anyone with anything near the zest he has for ruling.

Even with a slate of new challengers, the upcoming election will essentially boil down to another referendum on a man who in many ways has become synonymous with the country itself. Ask most people how they plan to vote and the reply will likely be “Bibi” or “just not Bibi,” regardless of the alternative. All it’s done is continue to validate him as this larger than life figure.

Netanyahu has always viewed himself that way, as has his inner circle. But a big chunk of Israel also simply can’t imagine a country without him at the helm. There’s a whole generation of Israeli children who have known no other prime minister.

The result has been a depletion of a quality political class.

Here’s a quick drill: Ask a friend, relative or acquaintance overseas to name an Israeli politician. There’s only one answer. I doubt most could come up with a second name.

It wasn’t always this way. In the age of Yitzhak Rabin, there was always Shimon Peres. Menachem Begin had an able deputy in Yitzhak Shamir. You didn’t have to be prime minister of Israel to be a politician with global name recognition. Remember giants like Moshe Dayan, Abba Eban, Ezer Weizman and pre-premier Ariel Sharon?

Those days are long gone. Now it’s Bibi and the seven (or more) dwarves around him.

Part of the reason is an aversion to the politics-as-blood-sport mindset that has taken hold in Israel and has persuaded many natural leaders in this country to prefer the safer, and far more profitable, pastures of business and high-tech. Another part is Netanyahu’s own compulsion to reign supreme, which has beaten down and worn out anyone with even a hint of potential to succeed him.

Would-be Likud heirs like Saar, Moshe Kahlon and Silvan Shalom have bolted, folded or withered away. His chief challengers in the 2009, 2013 and 2015 elections, Tzipi Livni, Shelly Yachimovich and Isaac Herzog, respectively, are all long gone from the political scene. And look what he’s done to poor Benny Gantz. The dashing defense minister with all his military aura has now shriveled into a political dead man walking.

That’s why replacing Netanyahu seems like such an insurmountable challenge. It’s not just a matter of policy or strategy. It’s a matter of imagination. After so many years, and so many tries, we just can’t see it happening.

It’s that kind of imperviousness that has earned him the undying devotion of his followers and even the begrudging respect of his many despisers.

Like everything else in 2020, this time around could be different. Netanyahu is more vulnerable than ever. The weekly street demonstrations against him show so sign of slowing and an economy battered by the coronavirus and his questionable handling of it has upended traditional political calculations. The Saar effect, and the Likudniks following him, have led several pundits to predict that the last of Netanyahu’s nine political lives may have finally arrived.

But remember, Netanyahu is different. With his criminal trial hovering in the background, he’s not only waging war to stay in office but also to stay out of jail.

Amid this sense of siege, only one thing can be certain: Netanyahu won’t go down without a fight.